My work inherited an ASP.NET WebApi Project from a contracted company.
One of the first things added to the project was a Dependency Injection framework.
DryIoc was selected for it’s speed in resolving dependencies.

In this post, I show why and how reflection was utilized to improve the Dependency Injection Registration code.

First, let me provide a high-level overview of the architecture (using sample class names).
The project is layered in the following way: 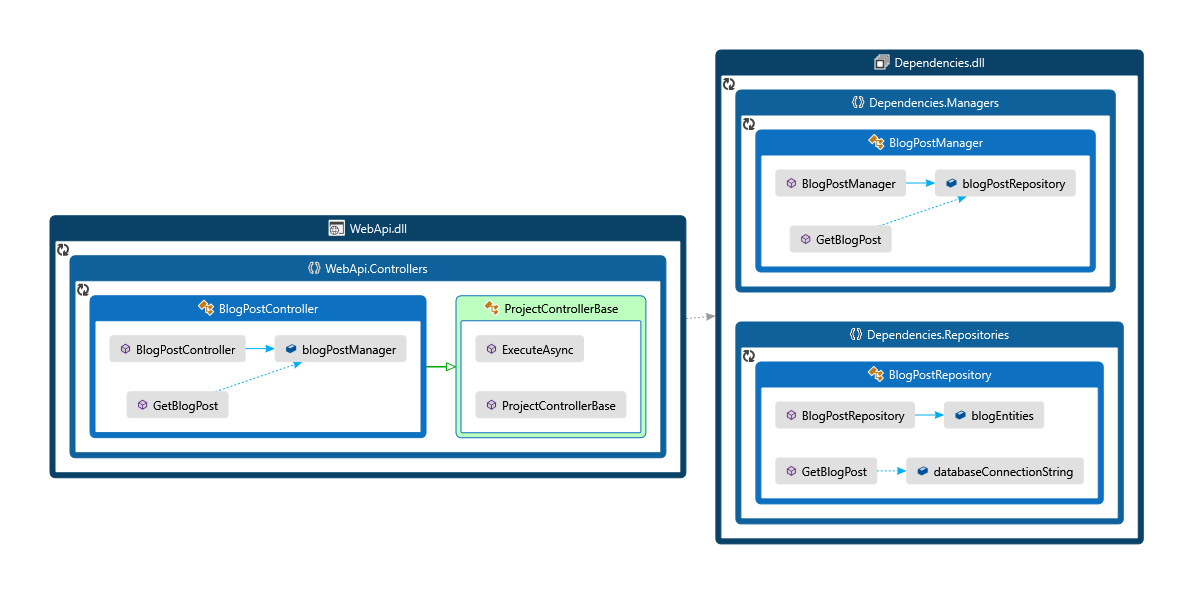 Controllers are the entry-point for the code (just like all WebApi applications) and are structured something like this:

Controllers are responsible for ensuring sane input values are provided before passing the parameters through to the Manager layer.
In doing so, the business logic is pushed downwards allowing for more re-use.

The ProjectControllerBase provides instrumentation logging and as a catch-all for any errors that may occur during execution:

My goal is to refactor this at some point to remove the ILogger dependency.

Each Manager is coded to an interface.

By doing this, the Liskov Substitution Principle can be applied; allowing for flexible and isolated unit tests.

Repositories act as the data access component for the project.

Entity Framework applies an ORDER BY clause to ensure results are grouped together.
In some cases, this caused queries to timeout.
Often, this is a sign that the data model needs to be improved and/or that the SQL queries were too large (joining too many tables).

Additionally, our Database Administrators wanted read operations to use WITH (NOLOCK).

To the best of our knowledge, a QueryInterceptor would need to be used.
This seemed to be counter-intuitive and our aggressive timeline would not allow for any time to tweak and experiment with the Entity Framework code.

Each Repository is coded to an interface.

By doing this, the Liskov Substitution Principle can be applied; allowing for flexible and isolated unit tests.

The Dependency Injection framework is registered during application start-up with OWIN:

The DependencyInjectionConfiguration class registers the container for the application to resolve dependencies using the following code:

Problems with this would occasionally arise when a developer introduced new Manager or Repository classes but did not remember to register instances of those classes with the Dependency Injection container.
When this occurred, the compilation and deployment would succeed; but the following runtime error would be thrown when the required dependencies could not be resolved:

An error occurred when trying to create a controller of type ‘BlogPostController’.
Make sure that the controller has a parameterless public constructor.

The generated error message is not helpful in identifying what the underlying issue is.

To prevent this from occurring, all Manager and Repository classes would need to automatically register themselves during start-up.

To automatically register classes, reflection can be utilized to iterate over the assembly types and register all Manager and Repository implementations.
Initially, this was done by loading the assembly containing the types directly from the disk:

While this works, it felt wrong to load the assembly from disk using a hard-coded path; especially when the assembly will be loaded by the framework automatically.
To account for this, the code was modified in the following manner:

Unfortunately, there is no timing metrics available to for measuring if there are any performance improvements for either implementation.
With that said, the second implementation seems faster.
This may be because the assembly is already loaded due to other registrations that occur before the reflection registration code is executed.
For this reason, results may vary from project to project.

Overall, the solution works well and has limited the runtime error appearing only when a new Entity Framework context is added to the project.

Your browser is out-of-date!

Update your browser to view this website correctly. Update my browser now